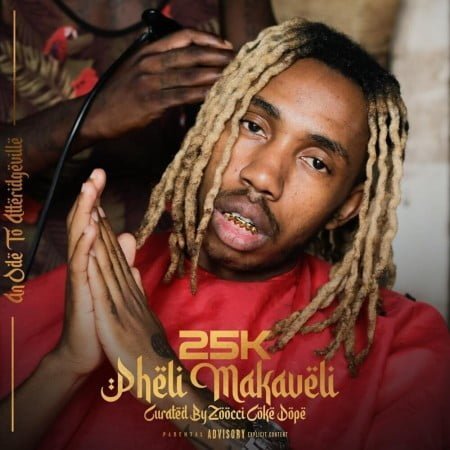 Finally the wait has come to end as award winning rapper and performer 25k who have been hitting up the industry since the beginning of the month is here today with his highly anticipated 2021 studio LP project titled Pheli Makaveli Album. Cop below and enjoy.

“Pheli Makaveli Album” have been trending on all social media platforms for weeks now since the cover artwork of the project was shared by the rap mogul. The project also will mark his first project in about 3 years now as he decides to revive the SA hip hop genre. The was created and produced by basically Zocci Coke Dope who have been widely considered as the best hip hop producer in Mzansi.

The project will run for basically 2 hours long, and housed about 12 tracks in all, featuring other top and notable hip hop artists in the country like A-Reece, Emtee, Zoocci Coke Dope, Flvme, Killa-X, Maglera Doe Boy as they journey into creating a perfect history in the industry once again. So without added ado, update your playlist and leave a feedback with us using the comment box below.

25K over time have proven to be one of the best hip hop artist in the country following his series of awards, and also have shared stage with other top artists. He has often being compared with the likes of Cassper Nyovest, Nasty C, K.O, and AKA. He started his musical journey over half a decade ago, and till now he still maintain his top level as one of the best in the industry. He’s last mega project will be a joint one titled “Champion Music EP” which he shared with Maglera Doe Boy and DJ Sliqe, but today he decides to go solo on Pheli Makaveli.

On Pheli Makaveli, 25K kick-started the project with his intro which he named after the album title, and hint on it being the best on the project, but so far many have bet to differ. He then connected with Zoocci Coke Dope and A-Reece as they journey to Blarofonia and Hustlers Prayer respectively before going solo on Omertà, Trap Jumpin’, Dagwood, Apple Soda/ Record Deal and Project Baby (Interlude) before fusing up together with ATM boss Emtee where they bragged about their achievements on “Self Made”.

He didn’t stop there as he also traveled far to link up with one of the hottest in the industry Flvme as they rises the coast on a new hit track “From Dusk Till Dawn” where both were spitting strong bars on their lyrical sessions. After which he linked with Killa-X on “King’s Gambit” before ending the project with Quarter To Six alongside Maglera Doe Boy.