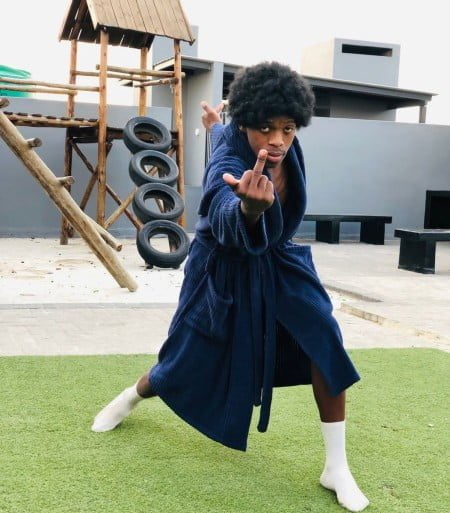 Just when we thought we had seen it all, high talented rapper and performer Big Xhosa who have been heating up the country since this year for his funny rap style is here today with a new song titled NdiyaJola as well as the mp4 official music video. Cop below and enjoy.

“NdiyaJola” will mark his 4th track this year and already tearing the country for his popular diss track. Few days before the track, the rapper made some side comments about fans reactions to the 2021 SAMAs award nomination where his name was not found in any category. So the track might be another street smasher to prove his bigger than the award. So without added ado, update your playlist and leave a feedback with us using the comment box below.

Big Xhosa who have been previously known as SOS have been tearing the SA hip hop since this month following his diss track “Ninyile” where he went so hard on A-Reece, Nasty C, Emtee, Cassper Nyovest, Focalistic, Big Zulu and Shane Eagle, and today he decides to make another wonder with Zumest Sound on NdiyaJola mp4 official music video where he kept clamoring himself as the best rap, rapper, rappest. The youngster have been in the industry for quit sometime now but didn’t get the recognition he deserved and the thought of the diss track emerged.

NdiyaJola will serve as the 4th track Big Xhosa is dropping the month and just a week after his Amasende, so it can simply entails one thing, and we believed the rapper might be on the verge of dropping an album following his massive trend on social media this month, so stay tuned with us as we will be the first to drop the full project upon release.

Stream, and share “NdiyaJola”. Don’t forget to drop your comments below.