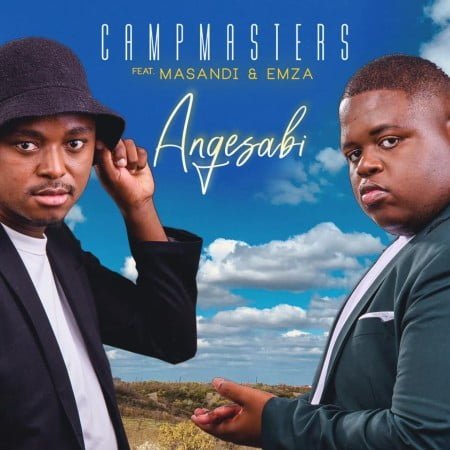 Finally the wait is over as high talented DJ duo and record producers Campmasters who have been hitting up the country since this year decides to light up the weekend once again as they drops a new gqom song titled Angesabi where they featured Masandi and Emza. Cop below and enjoy.

“Angesabi” have been on high demand for long long now since the track was previously promised to be released last week but was later shifted due to some reasons, but today we decides to serve the full original as we groove to the weekend. The track also will serve as their 2nd track this year after their first hit “iBus” where they connected with T-Man, DJ Tira, Goldmax and Siboniso Shozi, and will also be inclusive on their upcoming studio album which will be released later this year, so stay tuned with us for the full project when released. In the main time, update your playlist and leave a feedback with us using the comment box below.

CampMasters have proven beyond doubt to be one of the best gqom music producers despite being one of the most underrated in the industry. The duo started their musical journey about half a decade ago and since then have perfected the genre with their new evolving sounds which often accompanies with their bass drum, but now they tends to add killer vocals to spice up the song, one of which can be seen on their last year track “Nanini” where they featured the House vocalist and songstress Mpumi Mzobe, and today they decides to make another history with Masandi and Emza on Angesabi.

Masandi and Emza on the other hand have been heavily linked with House Djs but don’t quite often drop their own singles, but their contributions and support to the growth of the music industry can’t be overlooked as bother were previously featured on TNS Phupholetu Album where they helped in 2 tracks “Ingoma” and “uDaddy“, and today they decides to extend their awesomeness to Campmasters as the journey together on Angesabi.

Stream, and share “Angesabi”. Don’t forget to drop your comments below.