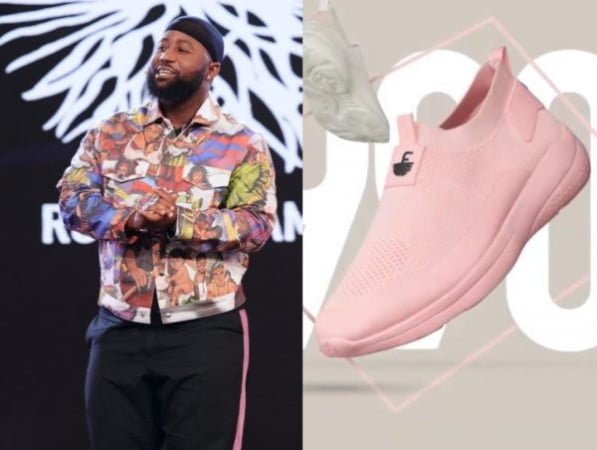 Cassper Nyovest Slams Fan who Criticized him for Pink Sneaker

Cassper Nyovest slams fan who criticized him for pink sneaker. The rap mogul have been trending on social media lately since sharing his new found project on twitter alongside his Root Of Fame 990 sneakers which cost an estimated amount of R990. This brought mega hype among fans as on his social media pages as many have been excited for his new found dream project, while some didn’t digest it well because of the color of the shoe.

VERY HOT: Cassper Nyovest Laments On Getting A Second Car

Few days after he started promoting the brand on his social media handlers, the product sales were tremendous, thus leading to some of it’s version being out of stock. The criticism came after Cassper shared the pink version of the sneaker on his pages, and the turn was much, then a twitter user decided to share a Homophobic response saying, “Pink shoes. I see a lot of guys coming out of the closet.” It didn’t take time before the tweet got Cassper attention who responded saying, “Brother, it’s 2021. Are you serious?”. However, it’s still unclear whether the rapper is slamming the user for speaking up about the color or he meant that the version was for ladies only while some men could actually go for it.

Later that day, Cassper Nyovest drops some hints and lectures about his secrets to business success, and what helped him in turning hate speeches and negative energy into motivations to help him push his products even higher, thus attaining a greater success.

“People don’t know what they want. We live in a world of followers. The most popular thing in the world right now is social media and what is the currency?…followers. Anything that is popular right now that is pushed on social media is just pushed to the mentality of following. For instance, if you sell something new and the first ten people say it’s wack, the next people that are gonna come are going to want to follow the trend of “it’s wack”. Nobody wants to be different, nobody wants to be bold. The difference is, I’m not a follower, I’m a trend setter. I set trends that’s why everything I touch turn into gold. I don’t have a failed project to my name because I believe in myself. I believe in everything I do, I make sure everything that I come out with is something that’s well researched, whether it’s a song or retail selling footwear…. not everybody liked the shoe but now the shoe is selling like crazy….,” Cassper said.