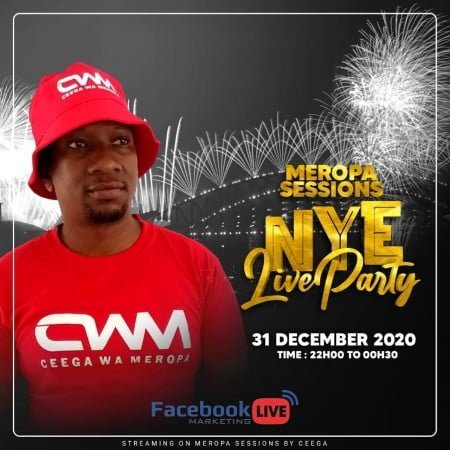 High talented DJ and record producer Ceega Wa Meropa who have been regarded by many as the best deep house hit maker in the country is on a new vibes as he drops a new year eve mixtape sessions titled NYE Live Party Mix 2021. Cop below and enjoy.

“NYE Live Party Mix 2021” runs for about 3 hours with dope and exclusive deep soulful hit tracks on its tracklist, and many of which will be inclusive on his upcoming studio album which will is likely to be dropping later this year, so stay tuned. In the main time, update your playlist and leave a feedback with using the comment box below.

Apart from making music, Ceega have been one of the strongest name when you come to this genre and thus being attracted by many loyal fans on social media which have placed more support towards him than many other National DJ.

His mixing skills have indeed blessed him with many support from many nations, even from international house heads. Thus giving him many gigs and as we write this post he will be live in Miami, USA in few months now to drop his first performance outside the country.

Now starting the year with a new killer mix, is indeed a good way to start a progressive journey, and no one we are expecting such vibes from apart from the Meropa king.

The mix was previously interrupted during the initial time of recording due to some unforeseen issues but finally the mix went through and thus creating a perfect atmosphere for his fans. Peep the playlist of NYE Live Party Mix 2021 below.