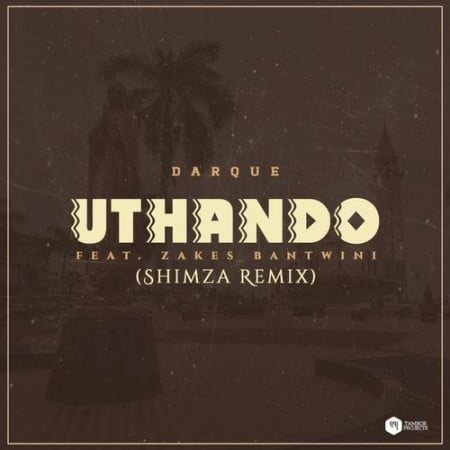 Just when we thought we had seen it all, top notch DJ and record producer Shimza who have been dominating the industry as the best Afro house hit maker in the industry is here with his 2021 remix of Uthando which was originally premiered by Darque featuring Zakes Bantwini. Cop below and enjoy.

“Uthando Remix” have been on so far one of the most anticipated locked tuned and have been used on several mix sets by many Disc jockeys. The track also will be inclusive on his upcoming mini album project, so stay tuned. In the main time, update your playlist and leave a feedback with us using the comment box below

Shimza whose real name is Ashley Raphala, and known by many as the “Effect King” and also have been one of the best and biggest DJs in Mzansi and follows the footstep of his mentor Black Coffee. The hit maker have been dominating in the industry and simply don’t rush his productions, thus making his music an expensive one, and many of his tracks still tops many charts in the music industry. His last appearance will be last year when he dropped his 2 dope tracks “Maru” and  “Calling Out Your Name” alongside Mikhaela Faye. And today decides to expand his coast even more by dropping the Uthando remix alongside Darque and Zakes Bantwini.

Darque who is popularly known as D&LOVELY on the other hand have been creating some unforgettable moments since stepping into the industry with lots of hit tracks and many of which will be bagged on his last studio LP titled “Must Be Africa Album” which features top notch music artists like Aymos, Zakes Bantwini and many other, and Sino Msolo was inclusive on that project, so this is not the first time helping each other to attain success, but with the help of Shimza on Uthando Remix today, it’s no doubt Kethiwe will last the test of time.

Stream, and share “Uthando Remix”. Don’t forget to drop your comments below.