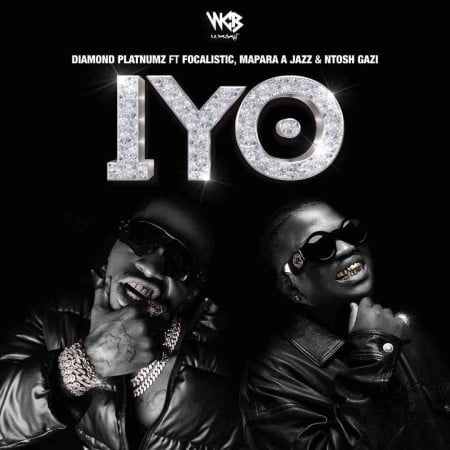 Finally the wait is over as multiple award winning Tanzanian singer and songwriter Diamond Platnumz who have often being considered as one of the biggest artist in Africa returns today with a new 2021 amapiano song titled IYO where he featured South African vocalist Focalistic, piano kings Mapara A Jazz and Ntosh Gazi as well as it’s full lyrics. Cop below and enjoy.

“IYO” have been one of the most anticipated 2021 song since the cover artwork was shared by the Bongo music king on his social media platforms, thus uniting the 2 countries and bagging lots of fans from Mzansi. The track also came as a result of the resent tour in Tanzania by Mapara A Jazz where they spent almost a month blowing the minds of music lovers with their amapiano presentations. So without added ado, update your playlist and leave a feedback with us using the comment box below.

Diamond Platnumz whose real name is Naseeb Abdul Juma Issack, have been dominating the industry in his country for more than a decade now, and often compared with the likes of 2Face, Davido and Wizkid when it comes to who is the biggest on international level. Apart from being a fine singer, the superstar have performed perfectly when it comes to dancing, acting, businesses and thus often called the nick-name Simba or The King of Bongo-Flava, and today he decides to expand his coast even more by connecting with Ke-Star hit maker Focalistic, John Vulu Gate kings Mapara A Jazz and songstress Ntosh Gazi as they journey to IYO.

Focalistic, Mapara A Jazz and Ntosh Gazi on the other hand have been dominating SA amapiano with their dope hit tracks, many of which still sits on number one almost all music chart in the country, and today they decides to extend their Bonga fans with IYO and no better one to help them with this except Diamond Platnumz Simba himself.

Stream, and share “IYO”. Don’t forget to drop your comments below.