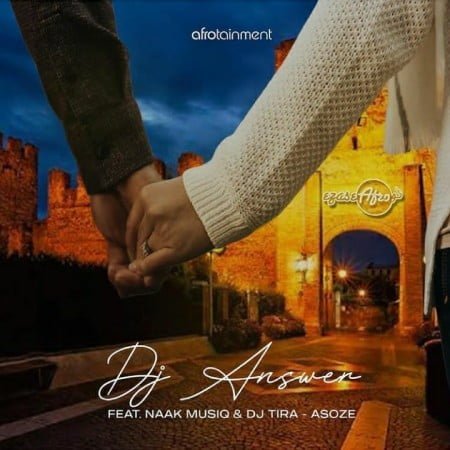 As we groove to the new month, high talented disc jockey and record producer DJ Answer who have been staying low key for a long time now decides to come through with a new afro house music titled Asoze where he featured NaakMusiQ and Afrotainment boss DJ Tira. Cop below and enjoy.

“Asoze” will serve as his first track on our web as the hit maker have always taken his time on his music, and this is simply the reason why fans have been clamoring him as the best House record producer under Afrotainment. The track will also mark the first track amidst his upcoming studio album which have been on high demand for weeks now since the project was announced by Mr Tira on his social media handlers. So stay tuned with us, but in the main time, update your playlist and leave a feedback with us using the comment box below.

DJ Answer have been in the industry for more than half decade now, but might not been widely known due to he always takes his time to perfect his productions, and today it looks like he has joined the Afrotainment record label, which have been one of the best label in the country when it comes to signing new music artists, and to crown it all, he decides to feature his boss DJ Tira alongside NaakMusiQ as they went down on Asoze song.

NaakMusiQ on the other hand, goes by his real name Anga Makubalo and have been one of the best hit maker in the country and also known for his TV shows Generations, Z’bondiwe and Isidingo and also winning one of the South African sexiest in 2013. The hit maker have been with Afrotainment for many years now and still considered top notch when compared to other producers in the category despite his clash with Prince Kaybee who merely mocked him of achieving lesser than him when compared their musical carriers and today he decides to perfect his name once again by lending his skills to DJ Answer and DJ Tira on Asoze.

DJ Tira on his own lane have been practically one of the greatest in his genre, and goes with the real name Mthokozi Khathi. He has also been one of the very few consistent music artist in Mzansi considering the years he has spent in the music industry. The disc jockey started his journey around year 2000 and till date still maintain top notch despite many criticism. He rose to limelight around 2017 when the gqom music genre became very popular, and thus he also formed his own record label Afrotainment. And today joining forces with NaakMusiQ and DJ Answer, you will know the tiger in him isn’t going down soon.

Stream, and share “Asoze”. Don’t forget to drop your comments below.