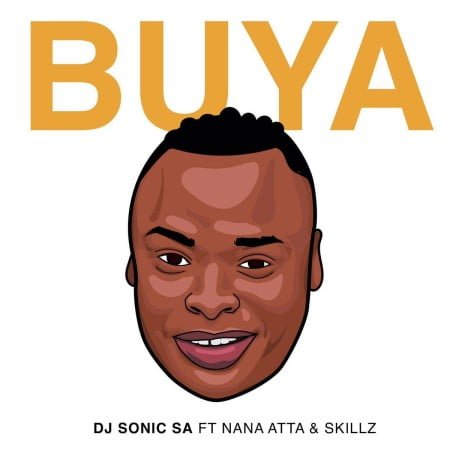 Finally the wait is over as high talented disc jockey and record producer DJ Sonic SA who have been on low key for long now decides to make a massive come back with a new afro house music titled Buya where he featured songstress Nana Atta and hit maker Skillz. Cop below and enjoy.

“Buya” have been smashing the industry since last month when the snippet was shared by the hit maker on his facebook page, and also hinted that the track will be inclusive on his upcoming studio album, so stay tuned with us as we will be the first to deliver the project upon release as usual. The track is a powerful banger with the angelic vocals of the songstress which hits the soul real hard. Without added ado, update your playlist and leave a feedback with us using the comment box below.

DJ Sonic SA as many already is not a man of many words as he allows his productions do all the talking, and today he installs another one. The hit maker is not the type that rushes in releasing countless tracks, but when he drops any, the streets will surely go tumbling, and as we mention above, it looks like he’s about to drop his studio album after many months of waiting and hooking up with Nana Atta and Skillz on Buya is a perfect to kick-start a project.

Nana Atta on the other hand have been one of the best vocalist when it comes to afro house music genre and have been heavily linked with other top hit makers in the industry as none can bypass her magical voice, and some of her tracks will be “Night Vision” where she performed alongside Que, Mampintsha and Karyendasoul, and also on “Amanga” alongside Zakes Bantwini, and currently working on her mini album project titled “U Ok Love? EP” which will be released on the 30th of April 2021, so stay tuned and in the main time keep the body warm with Buya produced by DJ Sonic SA and Skillz.

Stream, and share “Buya”. Don’t forget to drop your comments below.