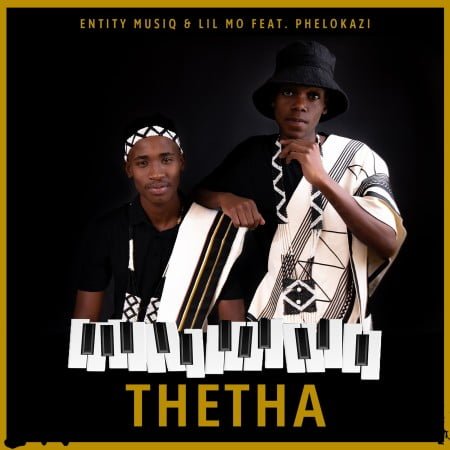 Finally the cat is off the box as top notch music group and record producers Entity MusiQ who have been hitting up the industry for almost 2 years now decides to connect with Lil Mo to perfect a new amapiano song titled Thetha where they featured vocalist Phelokazi. Cop below and enjoy.

“Thetha” which have been one of the most anticipated locked tune over the past few weeks was lifted from their upcoming mini album project titled Siyabulela EP which will be released any moment from now as the hit makers are yet to officially drop a release date but urge fans to watch out for it soon. The project will feature other top notch music artists in the industry and will be breaking many records as the trio have perfected their fan base and ready to hijack the throne as the piano kings. So without added ado, update your playlist and leave a feedback with us using the comment box below.

Entity MusiQ and Lil Mo have heavily been linked in the past and have produced lots of hit tracks together over the last 2 years, and some of their hit tracks will be their magic moments on “Nayi Lengoma” where they perfected the vocals with Msheke, and also on “Bumpa” which was pioneered by Hulumeni alongside Seshobala and Mbaleshka and the track still dominate many local charts till date, and coming together once again today with the breath-slaying vocals of Phelokazi simply proves “Thetha” will be on a repeat mode of many devices soon.

Phelokazi on the other hand have been one of the fastest rising singer and songwriter who have been considered by many as one of the best vocalist when it comes to amapiano music, thus many hit makers have been striving to get her collaborations, and working with Entity MusiQ and Lil Mo on Thetha is indeed a good move.

Stream, and share “Thetha”. Don’t forget to drop your comments below.