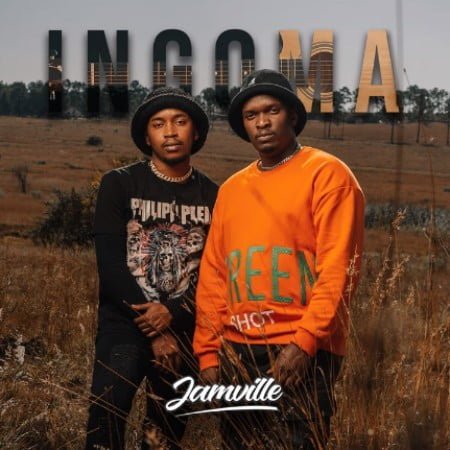 Just when we thought we had seen it all, top notch singer and songwriter Jamville who have been the talk of the country is here today as he graces his fans with his highly anticipated 2021 song titled Ingoma where he featured Nate. Cop below and enjoy.

“Ingoma” have been on high demand for long now since the track was first announced by the vocalist as he gears through dropping his long awaited studio album. so stay tuned with us as we will be the first to drop the full project upon release, and in the main time, update your playlist and leave a feedback with us using the comment box below.

Jamville is a musical duo from Ladysmith, Kwa-Zulu Natal. The band is made up of Siphesihle Sithole, who goes by the name Vesta, and Lungsani Mjali, whose stage name is Bhuda.

According to the last conversation with on of the duo Vesta, he opened up to us saying that his love and passion for music started at home. His father loved music and he passed on his love to him. He’s been honing it and creating since his teenage years.

“I grew up in a family that had so much love for music, especially my dad. I grew up with him playing a lot of music in the house. I started writing my own music when I was in high school, so did my partner, Bhuda. We met after high school. I was with a group before I became a solo artist, unfortunately we parted ways because of growth and having different goals and visions when it comes music,” Vesta tells iminathi.

He also added that he met Bhuda in 2016 and since then have been so keen to forming a stronger bond and thus making music together.

“We also found that we have the same goals in mind when it comes to music, we saw a vision when we joined forces that we could bring something different and that’s how Jamville was created. Finding our feet in the music industry has not been easy but one thing that has kept us going is having a passion and a different sound. In 2019 we released an EP titled Icebo which did well and better than we had expected.”

Late last year, the duo Jamville united with one of the best music artist in the country Mlindo The Vocalist, as they all went down on their biggest track so far titled Amehlo which still holds large spot on the heart of music lovers.

“The song was the first that we released commercially, and it was beautiful, people accepted it. But the song didn’t go as far as we wished because being independent means that we have to learn some things as we go. It has been beautiful although it has its ups and down,” Vesta says.

Bhuda on the other hand then added that their passion and drive will make them go far on their musical journey as they are yet to mark their mark.

“My love of music started at a very young age, I was a solo artist before I met Vesta. I knew him from his music and I enjoyed it. I featured him on a song of mine and the audience loved it. We decided we will be more impactful if we joined forces,” He says. And today coming along with Ingoma featuring Nate RSA will surely be a game changer for them.

Stream, and share “Ingoma”. Don’t forget to drop your comments below.