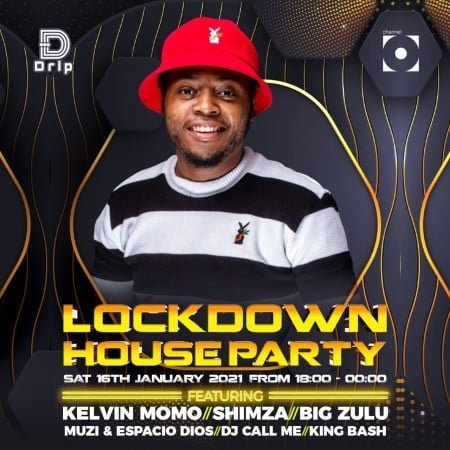 Multi-talented record producer and disc jockey Kelvin Momo who have been considered to be the best soulful house hit maker in Mzansi before switching to amapiano is on a new top vibes lately as he drops his highly anticipated 2021 Lockdown House Party Mix which he performed at Channel O and hosted by DJ Shimza. Cop below and enjoy.

The Lockdown House Party Mixtape sessions was delivered on 16th of January 2021 alongside other artists that performed that same day like Shimza, Big Zulu, Muzi & Espacio Dios, DJ Call Me and King Bash. The mix runs for about an hour with dope exclusive tracks selection on the tracklist including the popular Aluta Continua track which was perfected by the vocals of Babalwa M. Some of which will be inclusive on his upcoming studio album which he made some emphasis on in the beginning of the year, so stay tuned as we will always be the first to drop the full project upon release. In the main time, update your playlist and leave a feedback with us using the comment box below.

Kelvin Momo as many already know is not a man of many words as he allows his productions speaks for him. The hit maker have been consistent for almost half a decade now with countless hit tracks on his name. He attained more fame around 2019 after joining Kabza De Small record pianohub, and dropping his debut album “Momo’s Private School Piano” almost same time, and thus topping many charts, and becoming the artist with the most streamed album at that time.

The Lockdown House Party Mix by Kelvin Momo have been ascertain by many as the best mixtape sessions they have heard this month, and hope his upcoming album comes faster. The project is solely to support the current pandemic caused by the covid-19 as it’s victims have been on the rise in South Africa in couple of months now and thus leading to the President shorting down all festive activities.