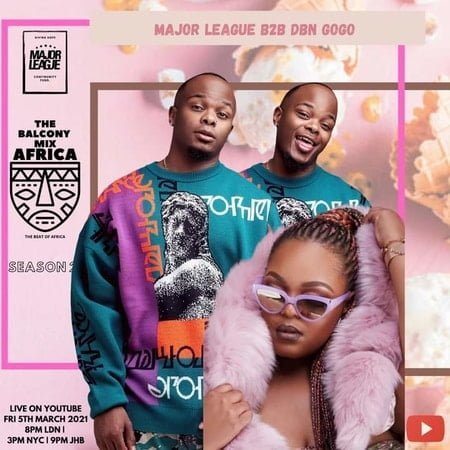 Amapiano Live Balcony Mix B2B (S2 EP8) will serve as their episode 8 of their weekend mixtape sessions which they have been using the sends sound message to fans as one of the best duo in the country. The mixtape also will house dope exclusive tracks carefully selected to perfect its tracklist and many of the tracks also will be inclusive on their upcoming studio album, so stay tuned. In the main update your playlist and leave a feedback with us using the comment box below.

Major league Djz have been doing the most lately with their series of live mixtape sessions since last year, and this year connecting with other top notch in the industry as they kick started the season 2 with Mr jazziq, followed by Kabza de small and mthuda, Vigro deep and now connecting with DBN gogo shows how good the duo are to the SA music industry as a whole.

It will come as a surprise to hear that this will be the first time the duo are partnering with Dbn Gogo they as we previously believed them to appear on Umbuso Wabam’nyama EP which was.