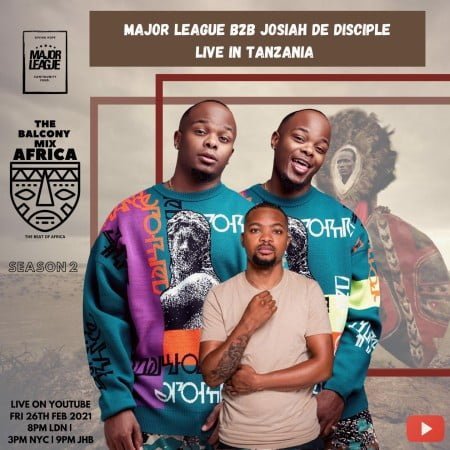 Finally the wait is over as award winning twin DJs and record producer Major League Djz are here today as they connects with Josiah De Disciple to light up the country with a new mixtape sessions titled Amapiano Live Balcony Mix B2B (S2 EP7). Cop below and enjoy.

“Amapiano Live Balcony Mix B2B (S2 EP7)” will run for about an hour with dope tracks carefully selected to match the tracklist the people have been waiting for as they paints the world with love. Also the mix will serve as the episode 7 of their season 2 weekend mixtape vibes and was performed outside the country as they all journeyed to Tanzania as they wrapped just before the Sunset. So without added ado, update your playlist and leave a feedback with using the comment box below.

Major league Djz have been doing the most lately with their series of live mixtape sessions since last year, and this year connecting with other top notch in the industry as they kick started the season 2 with Mr jazziq, followed by Kabza de small and mthuda, Vigro deep and now connecting with Josiah De Disciple shows how good the duo are to the SA music industry as a whole.

It will come as a surprise to hear that this will be the first time the duo are partnering with Josiah De Disciple as we previously believed them to appear on Umbuso Wabam’nyama EP which was released last year alongside Boohle.

This mix will follow his last debut mini album project titled Umbuso Wabam’nyama EP which housed about 10 tracks and still top many charts as at today, thus revealing that Josiah De Disciple might be on the verge of dropping a new project as the Amapiano live balcony mix B2B S2 EP7 comprises of many exclusives.