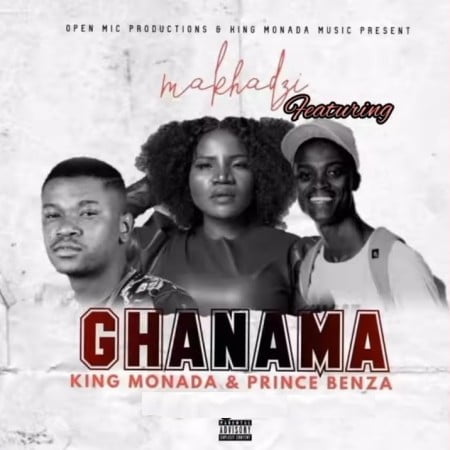 Finally the wait has come to an end as top notch Limpopo music duo and performers Makhadzi and King Monada who have been considered by many as the 2 biggest in the province when it comes to music are here today with their highly anticipated 2021 song titled Ghanama where they featured Prince Benza. Cop below and enjoy.

“Ghanama” without doubt is silently turning to the biggest unreleased hit this year as the track have had series of challenges and many was served on tik tok, thus making the track one of the most trended hashtag. The track was first sampled by the 3 music artist on Monada music studio, and there they displayed a powerful video where they were all vibing to the song, so today we decides to drop the full original mix to perfect the new month. So without added ado, update your playlist and leave a feedback with us using the comment box below.

Makhadzi and King Monada over years have become one of the most celebrated idols when it comes to bolobedu house music in the country, and earlier this week, both were recording a new track titled “Impossible” before the breakout video of Ghanama which then went viral. Few hours after, Monada decided to drop some massive bars on his social media handler where he self-proclaimed himself the owner of the song, but the songstress had to come in by dropping some note about the situation saying she respects the king well enough to take credit for her work, and the beef sprout so loud that Open Mic Production and other top notch artists had to join the dialogue, before Prince Benza then revealed the original title.

Prince Benza on the other hand have been representing his elder brother Master KG very well since emerging into the industry, and both have been dominating music in their province with the likes of Jerusalema hit track. So today he decides to extend his production skills on Ghanama where he settles with Makhadzi and King Monada.

Stream, and share “Ghanama”. Don’t forget to drop your comments below.