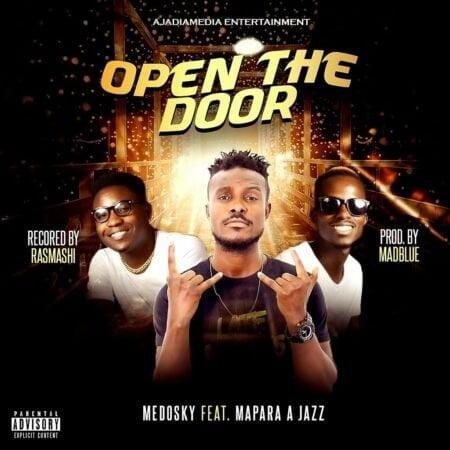 Just when we thought we had seen it all, top notch Nigerian singer and performer Medosky who have been hitting up the industry since this year decides to expand his coast as he connect with South African DJ duo and record producers Mapara A Jazz to drop a new killer amapiano song titled Open The Door. Cop below and enjoy.

“Open The Door” will mark the first track the artists have been featuring together as they both dominate their different space. The track was co produced by Madblue and directed by Rasmashi and from the look of things we might be getting a music video very soon as the track have been hitting the G spot in both countries in these recent weeks. The track also have been rumored to be inclusive on their upcoming joint studio album which have been rumored over the month, so stay tuned with as we will be the first to drop the full project upon release, and in the main time, update your playlist and leave a feedback with us using the comment box below.

Medosky as we said above is a Nigerian vocalist who have been dominating the industry with his killer track “Lambo” which he released about 4 years ago alongside legendary music artist 9ice, and coming today with a massive effort to Open The Door with the help of John Vuli Gate hit maker Mapara A Jazz simply shows the youngster is not a small knot to crack.

Mapara A Jazz as many already know are not small fish to fry in the industry and are top notch when it comes to amapiano genre, thus making their name to become a household name despite being in the game for just few year. The duo attained great success after their hit song “John Vuli Gate” where they worked with Ntosh Gaz and Colano, and since then the track have been trending on almost all musical charts in the country, and bagging many awards. The success of the track then led to many record labels agitating to get their signature, but Open Mic Productions finally won the battle and since then the duo have been doing what they do best. And hooking with with Medosky as they try to Open The Door we can smell a hit banger.

Stream, and share “Open The Door”. Don’t forget to drop your comments below.