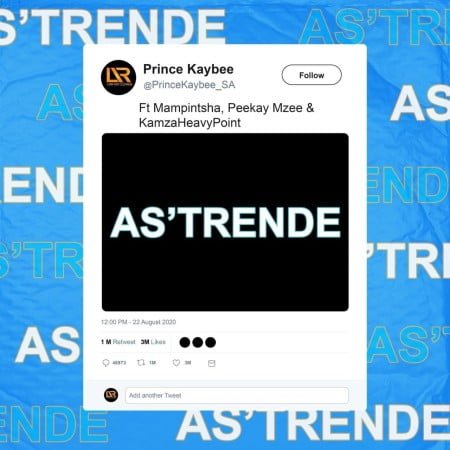 Finally the wait is over as award winning DJ and record producer Prince Kaybee returns with his highly anticipated afro house track titled As’Trende where he featured WestLink boss Mampintsha, Peekay Mzee and KamZa Heavy Point. Cop below and enjoy.

“As’Trende” have been on the wishlist pf almost all music lovers since the snippet was shared by the hit maker, and since then lots of cuts have been surfacing online as fans can’t wait to get their hands on the killer track. So today we decides to drop the full original mix song. So update your playlist and enjoy your weekend.

The track will be inclusive on Prince Kaybee’s upcoming studio LP project which he opened about the title some weeks ago calling it “The 4th Republic Album” which will serve as his fourth installation album project and will house some dope bangers, some of which are “Hosh” where he featured Sir Trill, “Ayabulela” where he connected with Caiiro and Sykes, “Uwrongo” which hosts Black Motion, Shimza and Ami Faku. He also talked about the release date of the album, stating that the LP will be out next month being October and also will house lots of top notchers in the industry. So stay tuned with us as we will be the first to drop the full project upon release.

Kaybee also shared some tweets last month about his vision of helping up and coming artists in SA and added he wished to help as much as possible before ending his musical carrier and now linking up with Peekay Mzee and KamZa Heavy Point shows the DJ is keeping to his words. He further urged fans to drop the challenge video and the 3 best will be featured for free on the above said album.

On the other hand, Mampintsha who have been hitting up the country since this lockdown seems not to be slowing down anytime soon. Some weeks ago he dropped his first solo album “Bhut’Madlisa” and also featuring on almost all track from Babes Wodumo’s 2020 album “Idando kazi” which served as the vol 2 of her gqom queen album.

It’s also good to pin point the fact that it’s the first time Prince Kaybee and Mampintsha are working together as they both faces different music genre. So this hook up is indeed what SA have been longing for a long time to come since the gqom genre started loosing out to the amapiano style of music.

Now this is somewhat good as trying to blend in afro house and the gqom in to becoming a single genre. No doubt many artists from these genres will try to practicalize this in time to come.

Stream, and share “As’Trende”. Don’t forget to drop your comments below.