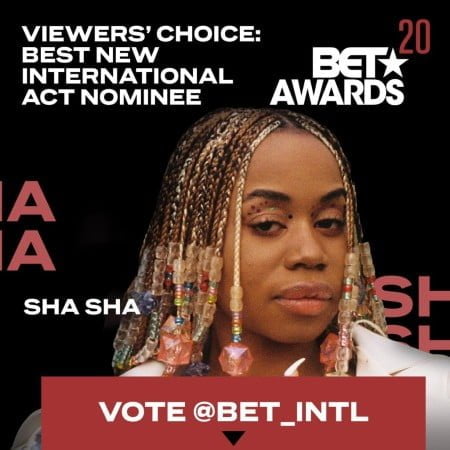 Award winning singer, actress and songwriter Sha Sha have been on the lips of many as she sets a record of the first Zimbabwean artist to get a BET Award nomination.

She was nominated for Viewer’s Choice Award for the best New international act alongside Rema from Nigerian, Burna Boy, Sho Madjozi and Chris Brown.

Charmaine Shamiso Mpambiro have been regarded by many as the best female vocalist in South Africa as she have been featured on almost all top chart trending tracks for almost 3 years now.

First she appeared on Black Coffee 2018 Music Is King EP where she was featured on 2 tracks and despite that she still have not sprung to the level she is today as many believed she will set records in Afro house music industry.

Later around 2019 the vocalist decides to join forces with the scorpion kings, a group made up of Kabza De Small and DJ Maphorisa and currently are the hottest in the industry as amapiano tends to be taking over the country.

She featured on many projects from the music duo and also alongside Samthing Soweto on his “Akulaleki” which have been considered by many as the music of the year and there she perfects the vocals of the song.

Sha Sha didn’t stop there, she decides to in turn return the favor by recruiting The Scorpion Kings on her mini album project “Blossom EP” which housed about 10 tracks and also her best song “Tender Love” which gave her lots of international as well as national attraction as the track went platinum in a shortest period of time.

With this she became so famous that she attracted so many African artists seeking to get her vocals on their project and some of which was her home town girl Trina South on “Love Me”, a track which they sets asides for the valentines day.

Since then she have helped in promoting many brands and artists with her powerful vocals like Aymos and Mas MusicQ on their last released album where she played massive role on “Ub’ukhona” and till date the track is on the playlist of almost every music lover.

Now Sha Sha BET Viewer’s Choice International Act nomination came up some months after she signed up with DJ Maphorisa’s record label and indeed we can’t express how impressed we are as she totally deserved it.

The vocalist also was recognized on the African Unite Project on “Play Your Part” were she worked with top notchers in the industry like DJ Maphorisa, Kabza De Small, Rouge, Tresor, YoungstaCPT, Riky Rick and Dee Koala as they advice Africa to stay safe and take all the necessary precautions amid the corona virus outbreak.

Accoding to ivorymp3, The amapiano goddess also opened up about her upcoming studio album and apologized for not releasing the project as she earlier promised due to the pandemic and lockdown in the universe so stay tuned with us as we will bring her next album to your door step.

Sha Sha is super excited and has taken to social media to express her feelings and also seek for vote.

“I’m out of words, did not see this coming at all 🙌🏽.Honestly I’m just grateful, thankful, excited , numb just a whole lot of emotions, the mere fact that I’m nominated man! This is amazing!” She said.

I'm out of words, did not see this coming at all 🙌🏽.Honestly, I'm just grateful, thankful, excited , numb just a whole lot of emotions, the mere fact that I'm nominated man! This is amazing! I need you all more than ever to bring this home pic.twitter.com/ch1Ji33Hsz

She couldn’t be more happier seeing herself being nominated as she have been posting on almost social media how happy she is and no doubt we are happy for our best amapiano songstress and we surely will stand with her and hop she bags the award home.