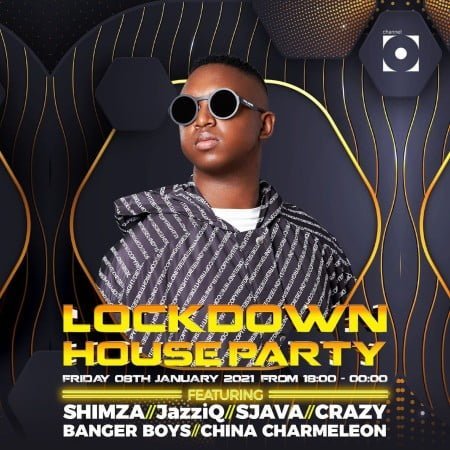 Just when we thought we had seen it all, multi-talented award winning DJ and record producer Shimza who have been considered by many as the best house hit maker in the country is on his best vibes lately as he opens the year with a dope afro house mixtape sessions titled Lockdown House Party Mix 2021 which he performed on channel O. Cop below and enjoy.

“The Lockdown House Party Mix 2021” delivered by the minister himself was performed live on the 8th January 2021 on Channel O alongside other top music artists like Mr JazziQ, Sjava, Crazy, Banger Boys, and China Charmeleon as he tends to keep the SA music industry alive despite the ongoing pandemic in the country which restricts gathering so as to reduce the risk of spreading the virus. The mixtape sessiions also will include many locked and exclusive tracks on it’s tracklist, many of which will be inclusive on his upcoming studio album which will be released later this year, so stay tuned with us. In the main time, update your playlist and leave a feedback with us using the comment box.

DJ Shimza whose real name is Ashley Raphala have been one of the best hit makers in Mzansi and popularly known for his effects, that also have compared by many with that of the legendary Black Coffee. The disc jockey rose to limelight around 2017 with the aid of his One Man Shows with the help of Black Coffee also, and was included on the list to perform on Tomorrow Land in 2020 but due the covid 19, the festival was shifted.

The Lockdown House Party Mixtape sessions was organised by Shimza himself in 2020 with the sole aid of helping fans and citizens who are stuck at home and restricted from going out due to the lockdown, and thus reducing the boring moments, without knowing the sessions will be so vast like this and this year will mark the season 2, and the effect king isn’t slowing down.

Stream, and share “Lockdown House Party Mix 2021 by Shimza”. Don’t forget to drop your comments below.