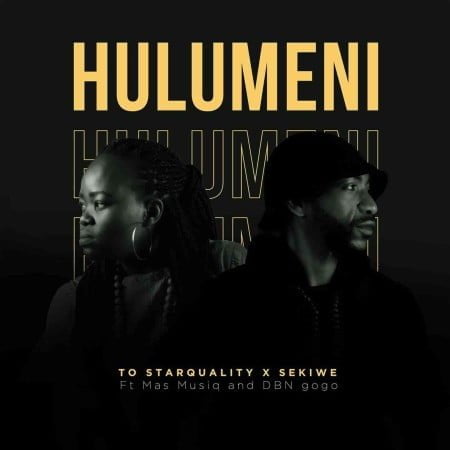 Finally the wait has come to an end as top notch hit maker TO Starquality and female vocalist Sekiwe who have been striving to become the next amapiano queen are here today as they joins force to deliver the full original amapiano song titled Hulumeni which fans have captioned as Vul’amasango and features ft. Mas Musiq and DBN Gogo. Cop below and enjoy.

“Hulumeni” which fans have captioned after it’s most repeated lyric Vul’amasango have been the talk of the town since the track was first sampled by DBN Gogo on her Amapiano Live Balcony Mix B2B (S2 EP8) which she delivered last month alongside the twin DJz Major League. And duo to the high quest of the track, many cuts have been circulating on the web, hoping for the original mix to be out and here it, so without added ado, update your playlist and leave a feedback with us using the comment box below.

TO Starquality and Sekiwe might not be your best Duo in the industry but surely you might change your mind after some months as the fast rising artists have got lots of good music in store waiting to unleash them, and Hulumeni (Vul’amasango) won’t be their first joint project as both have both created a magic moment in the part on “Hambe Nawe” which plays a major role on Mas Musiq Mambisa II EP, and coming today with some massive efforts from DBN Gogo is something we didn’t see coming.

Mas Musiq and DBN Gogo on the other hand have been one of the strongest head when it comes to yanos style of music in the country, with both having dropped countless hit track, and today decides to make memory with Hulumeni alongside TO Starquality and Sekiwe is surely a nice way to start the month.

Stream, and share “Hulumeni (Vul’amasango)”. Don’t forget to drop your comments below.