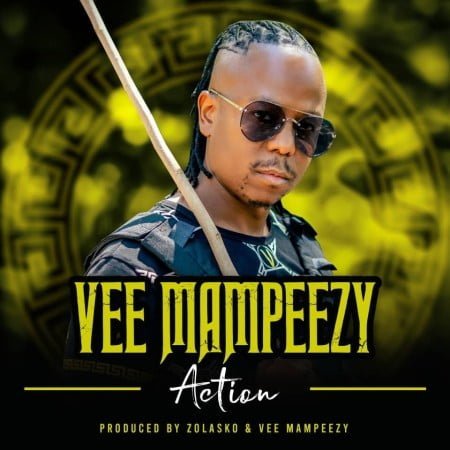 Finally the wait is over as award winning singer and record producer Vee Mampeezy who is currently considered by many as the best music artist in Botswana is on a new vibes lately as he drops his long awaited 2020 song titled Action alongside his homeboy Zolasko. Cop below and enjoy.

“Action” was produced by Zolasko and Mampeezy himself as they hits up the country with a new festive song. The track have been on high demand for many months now since the track was first announced, and no better time to drop the banger than now as we plan to journey to 2021. The track also will be inclusive on his upcoming studio album which will be released also next year as he told us some weeks back.

Vee Mampeezy whose real name is Odirile Vee Sento is a house singer and record producer who have grown to become one of the best in the country for almost a decade now. He started his music journey at a very tender age of about 14 and now dominating the country with his countless hit tracks and mixtapes.

He rose to fame around 2016 following the success of his hit tracks that year “yegela”, “ke a kopa ngiyacela” and “dololo” which lands him on the MTV list as best music artist in the country that year and thus paving many waves for him and ranking him more than many upcoming artists as at then.

He didn’t stop there, as Vee Mampeezy has been bringing many joy to the country these past months following the effects of the pandemic and the limitation of several activities in the country. He previously connected with Dr Tawanda on his hit track “Dumalana” and now partnering on “Action” with Zolasko is what we didn’t see coming, but what we know for sure is that this will be a banger.

Stream, and share “Action”. Don’t forget to drop your comments below.