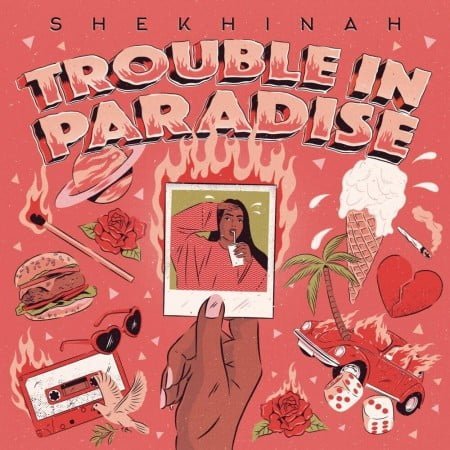 Multi-award winning singer and songwriter Shekhinah who have been the talk of all social media platforms since this month is here today as she finally drops her highly anticipated 2021 studio LP project titled Trouble In Paradise Album. Cop below and enjoy.

“Trouble In Paradise Album” have been the hit of the month since the project was announced by the songstress on his Instagram page. The project also will house about 12 tracks in all and featuring other top notch music artists in the country like Bey T, Luke Goliath and Hloma Soga. The project also have been considered by fans to make the best Rnb and pop project this year as it will mark her first project in about 4 years after her “Rose Gold Album” back in 2017. So without added ado, update your playlist and leave a feedback with us using the comment box below.

Shekhinah whose real name is Shekhinah Thandi Donnell have been on her best vibes lately and no happier moment to extend her joy to the world than this year. The songstress is 26 years old and currently one of the biggest superstar to have originated from Durban. She started her musical journey at a very tender age around 2011 when she was nominated as one of the 32 standing for the Idols SA award and also as the last 6 in the following year, thus attracting many fans to herself and that was when her limelight was met, and then was perfected after her Rose Gold Album was certified Platinum by Risa in 2018, and today she’s on the verge of making a new history with Trouble In Paradise Album.

Her Trouble In Paradise Album will serve as her second project since her musical carrier and we hope to see more of her productions in near feature. On the project Shekhinah started the it with his “Tides” song before she even made her intro know with her “Not Safe” track where she went solo and also spread love with her magical vocals. The songstress didn’t stop there as also connected Bey T on “Fixate“, a track which she used as the promotion of the album some months ago, and before that she also went solo on Miserable before asking her fans numerous questions.

After that she decides to journey far to connect with high talented DJ and record producer Luke Goliath who was nominated last year SAMA awards to perfect her breath-taking story titled “Fall Apart” and also went hard with Hloma Soga to drop and Pick Up, and after which she went solo on “Insecure”, “Diamonds Do (Interlude)”, “Wedding Song”, “I Love It Here”, before closing the project with her “Beautiful Song”.

Tracklist Of Trouble In Paradise Album: