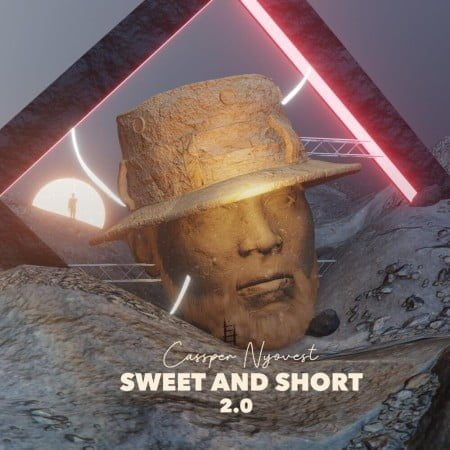 Finally the wait is over as multiple award winning rapper, singer, performer and business man Cassper Nyovest who have often be classified as one of the biggest music artist in the country is here today with his first ever amapiano studio LP project titled Sweet And Short 2.0 which will serve as the version 2 of his previous project which was mainly hip hop, pop and RnB. Cop below and enjoy.

“Sweet And Short 2.0 Album” have been on high demand for many months now since the rapper used his social media handlers to announce that he will be dropping a piano project this year. The project also will house about 10 dope yanos tracks and will feature other top notch music artists in the country like Abidoza, Samthing Soweto, LuuDadeejay, Kammu Dee, Lady Du, Ma Lemon, Semi Tee, Boohle, DJ Sumbody, Reece Madlisa, Thulz, and Zuma as he strives into creating a new history. So without added ado, update your playlist and leave a feedback with us using the comment box below.

Cassper Nyovest whose real name is Refiloe Maele Phoolo have often times called Mufasa, and he’s currently one of the biggest artists in Mzansi following his many deals with Apple, Sony and other top brands. The superstar will turn 31 this year December and also spent more than a decade in the industry with lots of tracks and projects to his name. He started his musical journey around 2011 and have grown into one of the most fashioned when it comes to SA music regardless of the genre, as he started his journey with hip hop and dominating with his rap flows, but with the evolution of the SA music industry, the rapper have tend to bend into amapiano, and so far have been one of the vocalist you can think of, and today he decides to serve us with the version 2 of his Sweet And Short album.

The rapper also have become one of the most consistent in the industry and made his last mark with his “Any Minute Now Album” which still sits on top list of all time most streamed hip hop LP in the country, and the project was dedicated to his son whom will be making a year later today. Over time, Cass have often compared with AKA and that have brought about long lasting beef between both artists.

The Sweet And Short 2.0 Album by Cassper Nyovest will serve as his 8th studio projects he’s dropping in his musical carrier. And on this one he started the movement with his “Khotso” track where he chose to go solo before connecting with Abidoza and Samthing Soweto to join him in celebrating the “Joy” in his heart amidst his new born baby. He didn’t stop there as he also partnered with Abidoza on 4 other tracks Ubumnandi, Piano Prayer, Siyathandana and Ama Number Ayi ’10, though the 4 tracks were accompanied by the skilled efforts and vocals of LuuDadeejay, Kammu Dee, Lady Du, Ma Lemon, Semi Tee, and songstress Boohle.

Cass also went far as to link up with his woman crush Lady Du whom he has so much admire for her vocals and talent, and they went on with Angisho Guys which was used to promote the project even more, before connecting with Boohle once again on uMacashelana, and then Bhanoyi which was perfected by Kammu Dee, Lady Du and Semi Tee. He then ended the project with “Fuck Me Harder” alongside DJ Sumbody, Reece Madlisa, Thulz and Zuma.

Tracklist Of Sweet And Short 2.0 Album: