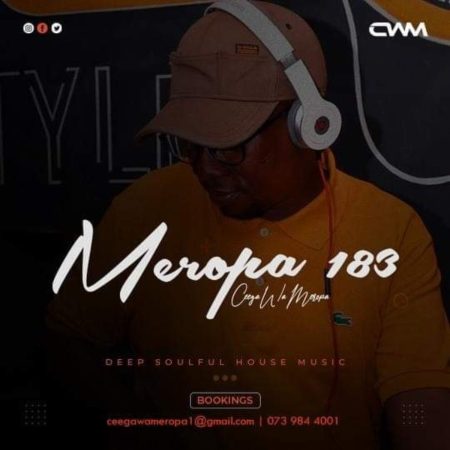 As we groove to the weekend vibes, top notch music artist and performer Ceega Wa Meropa who have been considered as one of the best DJ in the country is here with a new 2021 deep soulful house mixtape set titled 183 Mix (You Can’t Touch Music But Music Can Touch You). Cop below and enjoy.

“Meropa 183 Mix (You Can’t Touch Music But Music Can Touch You)” is without doubt one of the best sets the deep house minister have dropped this year, and the numbers have been speaking out already, just as it was captioned as when words fails, Meropa session speaks. The mixtape set runs for about 3 hours with dope tracks perfected selected by the hit maker to match what fans have been longing to grasp in a long time. Some of the tracks on the set are still unreleased, and will be released alongside his upcoming studio album which will make it the first massive project from the top notch disc jockey, so stay tune with us. In the main time, update your playlist and leave a feedback with using the comment box below.

Ceega Wa Meropa as many already know have been one of the outstanding hit maker and mixtape machines in the country, and have been consistent for many years now thus attracting many accolades, as last year he was gifted with the opportunity to play alongside legendary DJ Black Coffee on “Africa Is Not A Jungle Mix” live edition after his offer was turned down by Shimza and thus causing lots of beef on social media platforms. And today he decides to bless his fans once again with his Meropa 183 sessions mix.

This Meropa 183 mix set will follow his last killer Birthday live mix where fans nearly broke the Covid-19 protocol as they were so grieved not to have witnessed the performance live unlike their usual social media stream. The fame around the hit maker came late last year, where he opened up on his upcoming event in the United States of America, where he will be performing in Miami, a show which will stand as his first gig outside the country, and thus elevating him from being a national DJ to international.

Featured Artists On Meropa 183 Mix (You Can’t Touch Music But Music Can Touch You):

Stream, and share “Meropa 183 Mix (You Can’t Touch Music But Music Can Touch You)”. Don’t forget to drop your comments below.