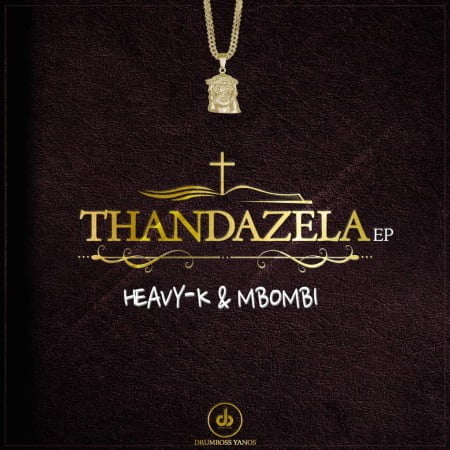 Finally the wait is over as award winning DJ and record producer Heavy K who have been considered by many as one of the best hit maker in the industry decides to join forces with songstress Mbombi to light up the country with a new mini album project titled Thandazela EP. Cop below and enjoy.

“Thandazela EP” without is already tearing every corners of the country as fans can’t get enough of the Drumboss productions. The project will serve as his first amapiano album which he promised some months back, and also added that he will be dropping a music video for 5 tracks on the project, but surely we didn’t expect 12 massive tracks. The project will feature other top notch music artists in the country like Lu Ngobo, Murumba Pitch, Natalia Mabaso, Aymos, Busiswa, 20ty Soundz, Tman Express, DJ Jaivane, Ntunja, Civil Soul, Sino Msolo, MalumNator, and Miss Twaggy as they all strive to make yet another history. So without added ado, update your playlist and leave a feedback with us using the comment box below.

Heavy K as many already have been one of the best when it comes to house music, and that’s where he started but today looks like he will be joining the trend after blasting the amapiano genre last year saying he will never produce such, that it was meant for kids, now looks like the dice have rolled over and he has finally bend the knee and fans obviously love him more for that as he brings up a different kind of bass drums into the genre and have once again proven to be one of the best with his Thandazela EP alongside his breath-slaying vocalist Mbombi.

The Thandazela EP by Heavy K and Mbombi was kick started with their Thandazela which was used as the intro the project and have being considered by many as the best track on the project and many thanks to the assistance of Lu Ngobo. They later went on with Jimile where they united with Murumba Pitch, before dropping their amapiano remix version for Uyeka which still houses the leading vocals from Natalia Mabaso, after which they linked with Aymos to perfect Mantu. The duo also decides to confront queen Busiswa and 20ty Soundz as they journey to Cd-J, before connecting with Simnandi records boss DJ Jaivane and Tman Express on Ngekhe (Stoko).

The couple didn’t stop there as they also went hard on Amathe which was perfected by Ntunja and 20ty Soundz, before connecting with Civil Soul on 2 tracks 2-Series and Kunini, after which they released their club banger We’mngage alongside Sino Msolo, and also connected with MalumNator on Utywala before ending the project with Vuma track which was perfected with the angelic vocals of Miss Twaggy. So let’s wait for the 5 music videos he promised.