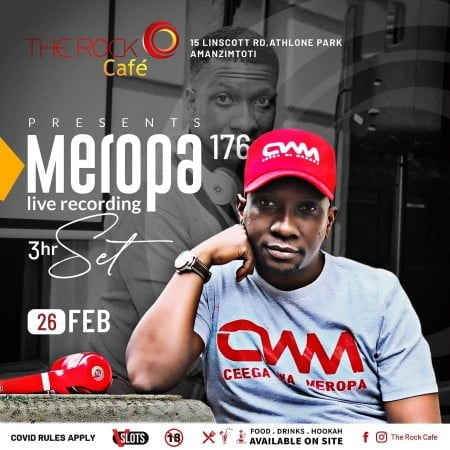 Finally the wait is over as top notch DJ and record producer Ceega Wa Meropa who have been hitting up the country for half a decade now and have been considered by many as the best deep house disc jockey in the industry is here today with his long awaited 2021 mixtape sessions titled Meropa 176 Mix which was record live at The Rock Cafe in Mazimtoti Durban. Cop below and enjoy.

“Meropa 176 Mix” will run for about 3 hours with dope and exclusive deep house tracks that will perfect your weekend and new year celebrations. The mixtape sessions was record live at The Rock Cafe in Mazimtoti Durban, first time he’s recording a mix outside his facebook page as he has been doing since the pandemic last year. Some of the tracks on the playlist will also be inclusive on his upcoming project which he promised will be out this year, so stay tuned. In the main time, listen up, and leave a feedback with using the comment box below.

Ceega Wa Meropa as many already know have been one of the outstanding hit maker and mixtape machines in the country, and have been consistent for many years now thus attracting many accolades, as last year he was gifted with the opportunity to play alongside legendary DJ Black Coffee on “Africa Is Not A Jungle Mix” live edition after his offer was turned down by Shimza and thus causing lots of beef on social media platforms.

The fame didn’t stop there, as late last year, he opened up on his upcoming event in the United States of America, where he will be performing in Miami, a show which will stand as his first gig outside the country, and thus elevating him from being a national DJ to international.

Last week, around the 1st January 2021, he also wowed fans with dope 3 hours mixtape session which he titled “NYE Live Party Mix 2021” and now coming through with a new meropa 176 sessions, no doubting his potentials anymore.

Stream, and share “Meropa 176 Mix”. Don’t forget to drop your comments below.