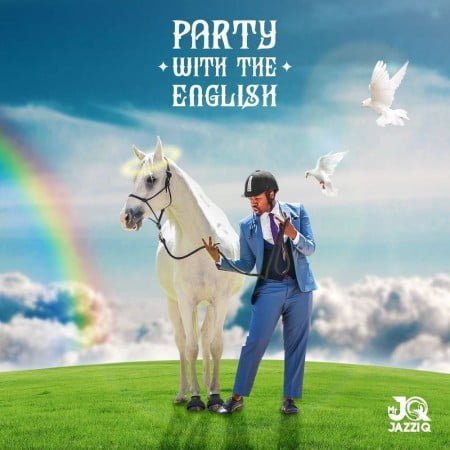 Finally the wait has come to an end as high talented DJ and record producer Mr JazziQ who have been making lots of headlines in the country returns with his first killer amapiano LP project titled Party With The English Album. Cop below and enjoy.

“Party With The English Album” have been the most wanted LP project since the the project was announced by the hit maker some weeks ago after his JazziDisciples brother Josiah De Disciple hinted on his “Spirits of Makoela, Vol 2: The Reintroduction album”. The project housed about 10 yanos tracks in all and featuring other top notch music artists in the country like Kabza De Small, Zuma, Reece Madlisa, Mpura, Purple Mellow, Busta 929, The Majesties, MDU aka TRP, Lady Du, Boohle, Fakelove, Mellow, Sleazy, Kay Invictus, Vic_typhoon, Soul Revolver and Koppz Avenue. So without added ado, update your playlist and leave a feedback with us using the comment box below.

Mr JazziQ as the name keeps striking to the moon this year, is a South African DJ and record producer who was previously known for his music group JazziDisciples alongside his friend Josiah De Disciple, and later dissolved the group last year due to some unknown reasons. Since then the hit maker have been blowing fans away with his new found name and thus also hinting that he’s the best when it comes to amapiano music genre by acknowledging himself as Yanos Culoe De Song but fans are yet to believe that, but with this first project Party With The English Album, he might be scooping the crown anytime soon.

The project have been dominating all digital stores as it tops number for more than a week now even before the it’s actual release date, and we have only seen such when Kabza De Small dropped his “I am the king of amapiano album” last year, so without doubt we know the youngster is on the verge of setting his own records.

During the promotional phase, the project Party With The English Album was brought to limelight with his tracks “Picture Junk Park” which was released last year and “Woza” which he just dropped this month as both done lots of good in bringing the project to almost beyond South African coast. While the official project was kick-started with Lerato where he linked up with Mpura, Purple Mellow and Busta 929 before facing his rivals The Majesties and MDU aka TRP on Sebenzela Wena.

Mr JazziQ didn’t stop there as he went far to curve out the vocals of Boohle and Mellow & Sleazy on Nomayini, and also Tshepi alongside his homeboys Kay Invictus, Fakelove, Vic_typhoon, Mellow & Sleazy, before connecting with PianoHub boss Kabza De Small to deliver with his magic touch on “Le Tin” before ending the project with Rockit, Kunana, and PWTE alongside Soul Revolver, Koppz Avenue and Mellow & Sleazy.

Tracklist Of Party With The English Album: