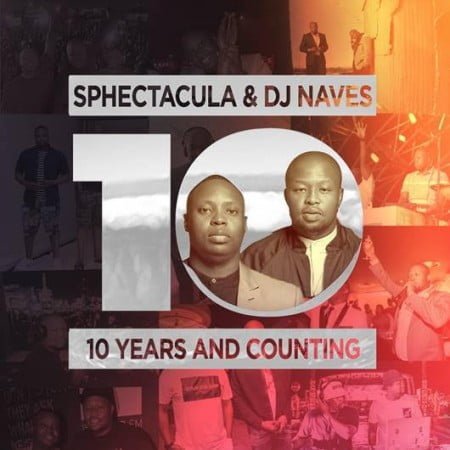 As we groove to the weekend vibes, top notch and award winning DJ duo Sphectacula and DJ Naves who have been hitting up the industry for long now decides to celebrate their 10 years anniversary in to the music industry with a killer LP project titled 10 Years And Counting Album. Cop below and enjoy.

“10 Years And Counting Album” have been the talk of the town since this year as it reminds the duo how they started their journey about a decade ago and faced their ghost in secrets before attaining success, and it’s indeed a thing to be celebrated. The party however, will follow probably this weekend as they duo tends to host few people due to the covid 19 protocol.

The project which have been on top trend lately will house about 13 tracks in all and featuring other top notch music artists in the country like Gobi Beast, Dumi Mkokstad, Nokwazi, Joe Jo, Beast, Nandi Madida, Focalistic, Abidoza, Zulu Makhathini, Prince Bulo, TNS, Angel, Magalela, Nue Sam, Deep Narratives, Xoli M, Zain SA, AirDee, Thebe, Unathi, Hope and Leehleza, as they strive to perfect the weekend. So without added ado, update your playlist and leave a feedback with us using the comment box below.

Sphectacula & Dj Naves as many already know have been one of the best duo in Mzansi till around 2018 when they decided to lower their pace of production, thus making fans to hunger for more of their tracks. The duo started their musical journey at a very young age when house music was the order of the day unlike now. Their upcoming studio album will mark their first project since 2017 as they only broke the break around last year with some hit tracks like “Okokoko” where they connected with Thebe & Unathi and also on “Thelumoya” which still tops many local chart till date and was perfected by Jaziel Brothers & Cassper Nyovest. And today they dominate the spheres with their 10 Years And Counting Album celebration.

The 10 Years And Counting project will serve as their 3rd album after the success of their “Kings Of The Weekend” and “The Kings Way Vol 1” both of which still tops many local charts till despite being released more than half a decade ago. On this one they opened the floor with their fire track “Umlilo” where they partnered with Gobi Beast, before setting the scores with worship singer Dumi Mkokstad on Masithandaza as they reverence the Most high God.

Sphectacula & DJ Naves didn’t stop there as they connected with Nokwazi and Joe Jo to spike up the industry with “Bonke”, a track which is considered by many to be the best single off the project. The duo also connected with Beast and Nandi Madida to share a perfect Smile, before dragging Focalistic and Abidoza on a new amapiano flows titled Matha, after which they hooked up with Beast, Zulu Makhathini and Prince Bulo on Awuzwe. Also for the first time, the duo decides to work with TNS, Angel and Magalela on Imisebenzi and we hope to see more collaborations in near future, before ending the project with Ngeke alongside Beast, Hope and Leehleza.

Tracklist Of 10 Years And Counting Album: