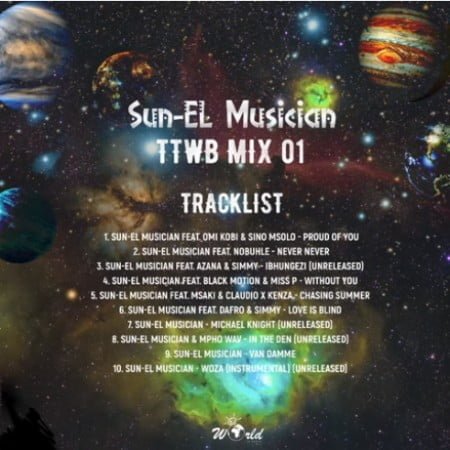 Just when we thought we had seen it all, top notch record producer Sun-EL Musician who have been considered by many as the best hit maker in the industry returns with his long awaited mixtape sessions titled TTWB Mix 01 as the first phase of his just released To the world and beyond album. Cop below and enjoy.

“TTWB Mix 01” runs for about 55 minutes with about 10 dope house tracks download the line, which will mark as the first mixtape session from his 2020 album “To The World And Beyond” as it keeps topping many local and international charts this month. So without added ado, update your playlist and leave a feedback with using the comment box below.

The mix also comprises of about 4 unreleased tracks which are “Ibhungezi” where he connected his queens in the EL World records Azana and Simmy, also “Michael Knight” which have been one of the most played this year by other top DJs in the country like Black Coffee, Shimza and Da Capo. The other 2 are In The Den where he went on a loggerhead with Mpho Wav, and on “Woza (Instrumental)”. With this, every fan will see the talent that have been bestrewed on this young hit maker as we await new mixtapes sessions, and possible another album next year.

According to Sun EL Musician last month during an interview with one of the best Entertainment website in the country hiphopza, the hit maker opened up about this 2020 being the most challenging for him and thus he has added more efforts on his productions, and making sure “To The World and beyond album” makes his best project since the beginning of his carrier, but can’t agree less.

Now backing up the project with series of mixtapes shows how dedicated and passionate the superstar is to his course and also to his music. Last week he came up with the visual concert which is practically the first of any kind in the industry. Peep the full playlist of the TTWB Mix Vol 1 below and enjoy your Xmas season.

Stream, and share “TTWB Mix 01”. Don’t forget to drop your comments below.