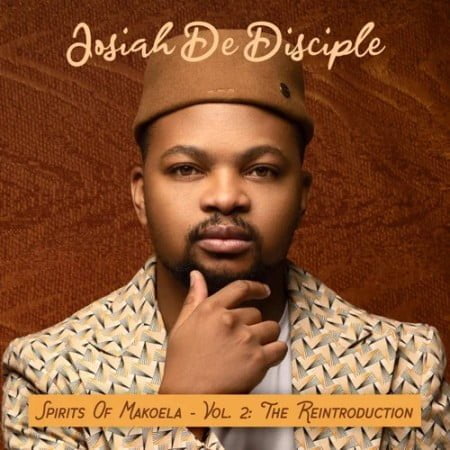 Finally the wait has come to an end as award winning piano king and record producer Josiah De Disciple who have been hitting up the industry for very long now decides to drop his highly anticipated 2021 studio LP project titled Spirits Of Makoela Vol 2 Album (The Reintroduction). Cop below and enjoy.

“Spirits Of Makoela Vol 2 Album (The Reintroduction)” have been the heat of the moment since this year as the king strives to regain his throne as the best in the amapiano genre. The project will house about 12 tracks in all and featuring other top notch music artists in the country like Kabza De Small, Ofentse, Cecil M, Boohle, Jessica LM, Teejay, Rams De Violinist, Da Ish and many other un-mentioned artists who have added massively to the success of the project. So without added ado, update your playlist and leave a feedback with us using the comment box below.

Josiah De Disciple as many already know him is the man behind the award winning music group jazzidisciples which have been the best duo in Mzansi for many years until last year when the duo had to separate to perfect their individual names in the industry. This came as a shocking news to the music industry as a whole and fans have always wished the duo gets back together in due time and today Josiah decides to go solo on his first ever album “Spirits Of Makoela Vol 2 Album” and thus the reason for the caption The Reintroduction.

The second brain master behind the success of the group goes by the name Mr JazziQ and have been doing the most since splitting the group, and have been dropping countless mixtape sessions including his last week Lockdown House party mix and last week he dropped his “Party With the English Album” which is topping many charts in the country till date despite fans not being happy with the projects.

The Spirits Of Makoela Vol 2 Album (The Reintroduction) by Josiah De Disciple will serve as his first solo project since leaving the group about a year now and urges fans to keep up the huge support. The project was kick-started with Spirit Of Makoela (Badimo) which serves as the intro of the project before connecting with the king of amapiano music genre Kabza De Small and Ofentse to perfect Sponono and Manuel.

He didn’t stop there as he decides to give the project even more spice by connecting with his vocalists Cecil M, Boohle, Jessica LM and Rams De Violinist as they went down on Moratuwa, SMS, Khuzeka, and Violin Blues respectively before Sharing his story with Da Ish and also hooked up with Teejay to perfect Ngale, before ending the project with his Amazon track and also declared to fans that he’s a Play Boy.

Tracklist Of Spirits Of Makoela Vol 2 Album (The Reintroduction):

Download and share “Spirits Of Makoela Vol 2 Album (The Reintroduction)”. Don’t forget to drop your comments below.